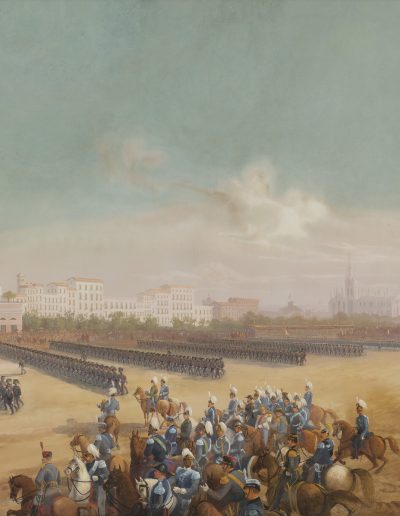 Milan. Military parade in honour of William the First of Germany

For the five day visit to Milan of William I, Emperor of Germany, from 18 to 23 October 1875, the city was paraded in celebration. For the occasion, the rubble of the Rebecchino block was cleared in Piazza del Duomo, demolished on day 12. The festivities were numerous and impressive, with gala lunches at the Royal Palace, la Scala evenings and picturesque illuminations. On the 19th the great military parade took place in Piazza d’Armi, where twenty years later the current Park will rise. The emperor, accompanied by Victor Emmanuel II, arrived at ten and a half, mounting on his horse Morello, sent specially from Berlin. On the balcony of the pulvinare of the arena which can be seen to the left of the tempera are Princess Margherita, the Duchess of Genoa with the ladies of the court and the Prince of Naples, the future King Vittorio Emanuele III. The parade lasted an hour and a half; It was taken by the 48th Infantry Regiment, the Asti Educational Battalion, the 9th Cavalry Regiment, the 3rd Brigade of the 6th Artillery Regiment, as well as the Military Academy of Turin and a company of Alpini.

The painter stopped the moment of the passage of the 8th Bersaglieri regiment in front of the emperor and the king, who were accompanied by their General Staff, including the President of the Council of Ministers, Marco Minghetti, in uniform as a major, and Field Marshal Helmuth Karl Bernhard von Moltke. On the right, in a staggered perspective, appears the bulk of the Duomo, inevitable element in a Milaneseview.